We have had some great days in 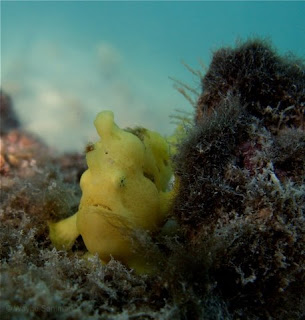 the water here at Midway Atoll. 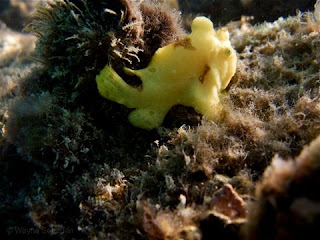 Snorkeling under the cargo pier off the shore, and venturing out to the emergent reef have provided many opportunities to view some magnificent marine animals. These images are of a Frogfish sighted in about 2-ft. of water along one of the concrete supports of the large Cargo Pier. The next photos show a few of the many sea slugs that we also observed at the same location. Two snorkels have resulted in 5 varieties of sea slugs, or nudibranchs sighted. Thanks to the website of Keoki and Yuko Stender, former dive master's at Midway Atoll and avid underwater photographers I was able to ID some of the more unusual marinelife that we have been encountering on our snorkels. 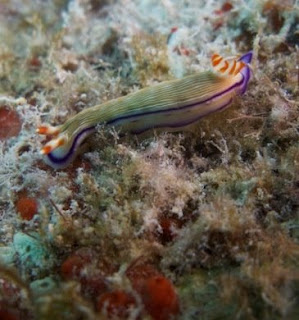 Many of these nudibranchs are easily seen since they are most commonly found on the support posts under the pier. No matter what month we arrive at Midway there always seems to be some species of slug busy navigating the substrate. Nudibranchs generally are 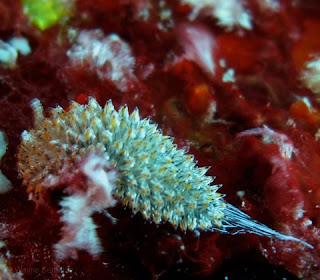 brightly colored and feed on sponges, hydriods, or sometimes even each other. Their bright color serves to warn other marine organisms that they are not very tasty and would be a bad meal choice. In fact many nudibranchs can incorporate the stinging cells or chemicals from the animals they eat into their own bodies, using them for their own defense. Although brightly colored, most slugs are less than a few inches long. 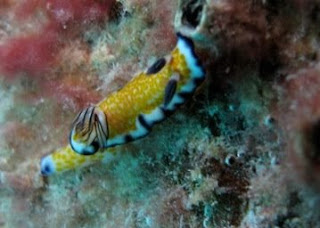 Under the pier larger animals are also encountered. We came face to face with many green sea turtles. They seem to enjoy the pier as a resting area and can be seen sleeping underneath the many beams and concrete pieces that are scattered underneath the pier. Once they are done resting they rise to the surface and head off to other areas of the island. It is always a great treat to have these marine reptiles swim right by you. Thanks to the great conservation efforts in Hawaiian waters over the last 30 + years the Hawaiian green sea turtle population is one of the true success stories in the conservation world. 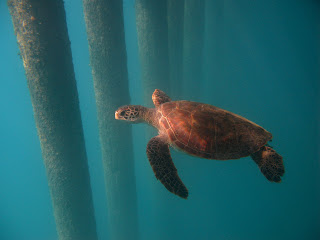 There are also many different fish species here as well. Sometimes small groups of large Ulua, with individuals weighting 70-lbs or more will swim right underneath you. 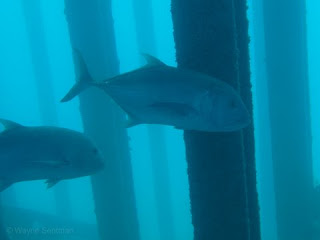 Large schools of goatfish and Thicklipped jacks are also abundant. 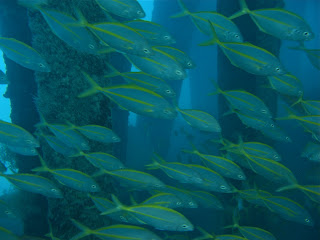 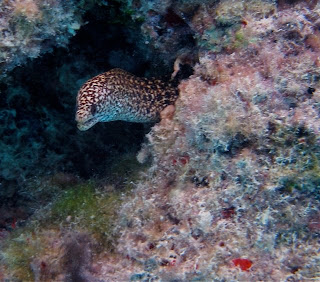 often found poking out of small holes in the pilings.

Each time we can get in the water, we are full of expectations about what we might be lucky enough to encounter. Rarely does time in the ocean at Papahanaumokuakea disappoint. Check back soon for more pictures from the lagoon snorkels.
Posted by naturefinder at 7:18 PM