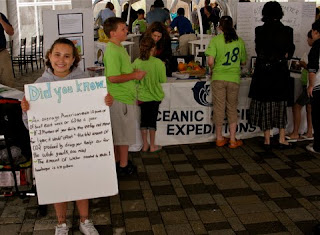 This past Saturday I spent the afternoon at the New England Aquarium with the Warren Prescott School 5th grade "Green Team" participating in a World Oceans Day event. I was joined by my collaborator Alisyn Johnson, and the students science teacher, Tina Champagne. Our group had been invited by the Aquarium education staff to participate in the Oceans Day family event. We were one of about 30 groups that set up tables to inform visitors to the aquarium about projects and things they could do to help the world's oceans. Tina and Alisyn organized the Green Team students to come to the event and talk to the folks there about the CO2 offset project that they had worked on this year, giving up red meat to offset CO2 produced by air travel related to marine research and ecotourism. This project started in September of 2009 and has continued throughout the year. 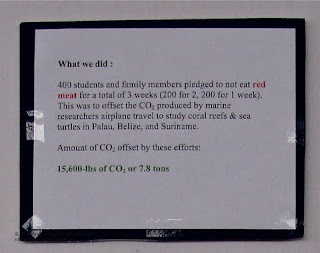 It is a combined effort of the Warren Prescott School, Oceanic Society (a non-profit marine conservation organization) and Quen.ch (a non-profit formed by a group of Harvard Extension School graduate students). During the course of the year over 400 students and their family members from this Boston Public School have pledged to stop eating red meat for varying lengths of time. From this project over 15,000-lbs of CO2 has potentially been offset by their efforts. The tie in to the marine environment for the students has been facilitated by connecting this offset to the Oceanic Society's marine conservation projects and through lectures provided by Harvard professors and graduate students. Assisted by Alisyn and Tina's efforts the students have connected with me in the field via SKYPE from both, Belize and Midway Atoll National Wildlife Refuge. During these audio/video calls students learned about sea turtle, seabird, and coral reef conservation efforts directly from the field location. The Midway call was especially exciting due to the background vocalizations of thousands of Laysan Albatross. 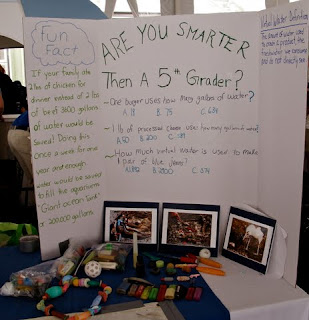 During the Aquarium event the students were able to take on the role of educators, talking to parents and other children about the environmental concepts they had become familiar with over the course of the year. Here they told all about the huge amount of CO2 generated by the factory farming of beef, what virtual water is and how red meat production consumes huge amounts of water relative to the production of other meats and vegetables. One of the many fun facts shared with the Aquarium visitors was that if a family substituted 2-lbs of chicken for 2-lbs of beef once a week for a year, over 200,000 gallons of water would be saved, enough to fill the aquarium's "Giant Ocean Tank."

It was a great day, many families participated, at our table many even made their own pledges to give up red meat for a week or more. 17 students from the Green Team assisted, and they also were able to visit with the other groups present, learning about different ways for them to continue to help conserve and teach others about the worlds Oceans. 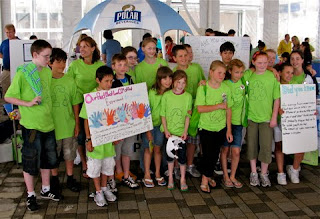 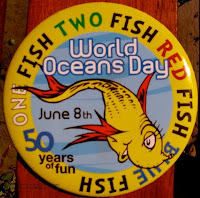