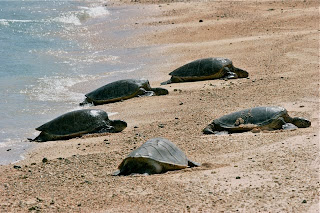 Today I am headed back to Midway Atoll with an Oceanic Society group of 16 persons. Three of these volunteers will be part of our Green Sea turtle "Scoping" mission. I will be joined at Midway by Marc Rice, Director of the Science and Technology and Sea Turtle Research Programs from the Hawaii Preparatory Academy. We will be working closely with sea turtle guru George Balazs, senior sea turtle biologist from the NOAA Pacific Islands Fisheries science center. Marc and George have been researching sea turtles at Midway and in Hawaii for over 30 years. When I worked at Midway in 1998 to 2002 I was lucky enough on occasion, to get out in the field with George & Marc, and with FWS biologists to help tag and monitor sea turtles there. The last time either Marc or George have been able to get back to Midway was in 2001. We have proposed a Sea turtle scoping project through Oceanic Society to the Midway Atoll NWR in an effort to look at what might be possible in the way of population assessment and monitoring of the sea turtles residing at Midway Atoll National Wildlife Refuge. 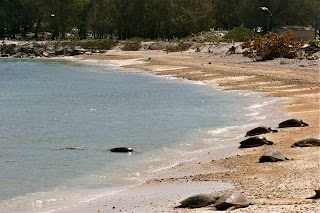 Over the years about 180 sea turtles have been tagged at Midway with much interesting information coming from this effort. When Midway was closed to tourism in 2002 the main basking beach (Turtle Beach) utilized by the sea turtles there was afforded extra protections. This was also coincident to a reduction in overall human activity due to the reduced number of people accessing Midway. Over the intervening years the amount of turtles using the beach has increased. It is not uncommon these days to visit Turtle Beach and see 20 to 30 turtles out basking in the sun. In addition the first successful nesting activity ever recorded at Midway was observed in 2006. With a few more nests being sighted in the last few years. The efforts of FWS to manage the important resting areas for turtles and reduce overall disturbance events seems to be paying off in increased numbers of sea turtles basking and nesting events. As the numbers of turtles sighted on Turtle Beach has grown it may prove interesting to explore ways to monitor the activity and see if certain individuals are regularly sighted. By ID'ing individuals it may be possible to interpret whether sea turtle numbers are actually increasing at Midway or if simply more of the turtles that have always been at Midway have started to bask on the beach due to less regular disturbance. 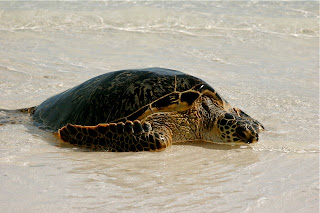 During this week we will try and get a good assessment of basking activity, sex of animals basking, and whether animals are out on the beach at night, possibly an indication of predator avoidance rather than basking. Marc has worked on a project at big Island with the Hawaii Preparatory Academy using video cameras to remotely monitor the behavior and successfully identify (and re-identify) individual turtles over time at the monitored sites. Using facial scale patterns and descriptive keywords it has been shown by Marc and others that sea turtles can be monitored without causing any disturbance to their resting behavior. 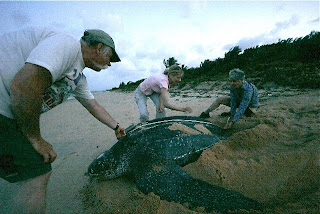 Oceanic Society has a long history of helping in the research and protection of sea turtle populations with their volunteer projects. One of our longest projects has been working with leatherback sea turtles in Suriname. We also have partnered with a great researcher in Ulithi Atoll, Jennifer Cruce, who is working with local communities to protect and monitor green sea turtle populations there. Through this preliminary fieldwork with FWS and George and Marc on Midway, we hope to continue that tradition. Offering a way to learn from the wonderful turtle activity we are witness to each year during our visitor programs at Midway. It will be great to be back out in the field with Marc after a 9 year hiatus. Stay tuned for updates on what we see and other interesting flora and fauna observed on Midway over the next 3 weeks.
Posted by naturefinder at 4:58 PM No comments: