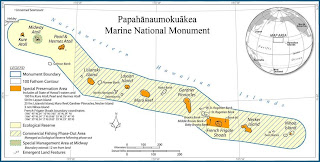 Disturbingly these breeding grounds and the PMNM also are adjacent to two of the largest concentrations of floating marine debris in the world’s oceans. Plastic debris makes up the 90% of the floating marine debris found in the ocean (Weiss, 2006). One of those concentrations, the "Eastern Garbage Patch” is approximately twice the size of Texas (Silverman, 2007). Both Albatross species nesting on MANWR and throughout the rest of the atolls in the PMNM spend much of their time feeding in areas adjacent to or directly in this “Garbage Patch” (Fernandez et al. 2001 and Auman et al. 1997). It is primarily while feeding that albatross ingest a variety of plastic items (Figure 2). 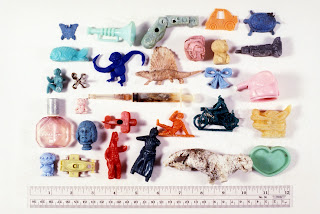 In doing so, they risk repeated exposure to an array of potentially toxic compounds (Jones et al. 1996, Ludwig et al. 1997, Mato et al. 2001, and Finkelstein et al. 2006). Further by regurgitating meals to their young, frequently loaded with this plastic, the true risks of this exposure may happen miles away from the point of contact, and some of these potential toxins may end up effecting the land-based albatross chicks more severely than the adults directly feeding in these areas. 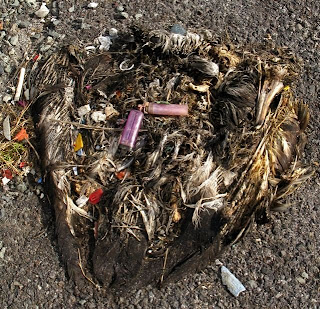 © 2009 Wayne Sentman
Plastic debris has been identified as a growing problem in the Pacific Ocean (A.M.R.F., 2007). The currents or gyres that cause the pacific garbage patches to accumulate also are responsible for focusing some of that impact directly on LAAL and BFAL. This as a result of overlap between where these gyres concentrate marine debris and the areas of the north pacific in which the albatross are spending their time feeding (Naughton et al, 2007). Additionally while many species of seabirds are known to ingest plastic (Laist, 1997), both the LAAL and BFAL albatross chicks have been shown to regularly have relatively high, and increasing total amounts of plastic in their guts (Kenyon and Kridler, 1969, Auman et al. 1997, Naughton et al. 2007). This is also compounded (for chicks) by not being able to expel, through regurgitation, any items in their gut until about 3 to 4 months of age. Therefore plastic brought to the chicks through the parents many feedings tends to sit and accumulate in the chicks’ digestive tract for long periods of time. 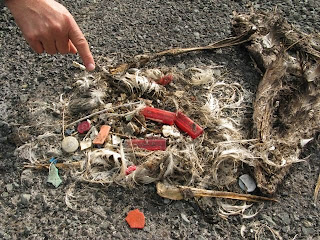 © 2009 Wayne Sentman
This accumulated plastic has been shown to have detrimental effects to the success and survival of the albatross chicks (Sileo et al. 1990 and Fry et al. 1987). Additionally past research has shown high levels of organochlorine contaminants in albatross adults and chicks (Auman et al. 1997 and Finkelstein et al. 2007) and this likely has a relationship to ingested plastics.