November and December on Midway Atoll 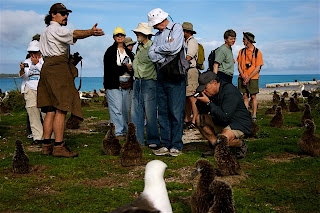 I just spent two wonderful weeks on Midway Atoll National Wildlife Refuge leading two Oceanic Society ecotourist groups. We were able to see some amazing wildlife and participate in valuable projects while there. The weather at this time of year was a little blustery but overall we managed pretty well.

In 2008 Midway has again reopened to visitors after a 6-year hiatus. Oceanic Society is a marine conservation non-profit based in San Francisco that I work for. Oceanic Society organized all ecotour and volunteer research programs for visitors to the US Fish & Wildlife Service (FWS) in the past (1997 - 2002). Currently we are working with the Midway Atoll refuge staff and the Papahanaumokuakea Marine National Monument to continue in organizing naturalist led ecotours and groups interested in historic restoration now that the refuge has restarted its visitor services.

Since the formal designation of the Marine Monument in 2007 encompassing Midway and the other Northwestern Hawaiian Islands there has been renewed interest in traveling to Midway Atoll, really the only visitor accessible site for the entire monument. To learn how to pronounce the Hawaiian name of the monument click on this link, Papahanaumokuakea. The monument is the second largest fully marine protected area in the world (the largest is the Phoenix Islands Protected Area in Kiribati). It is home to the largest 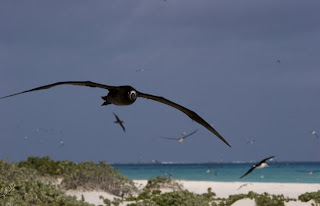 nesting colonies of the Laysan and Black-footed Albatross. The last refuge of the critically endangered Hawaiian Monk seal, 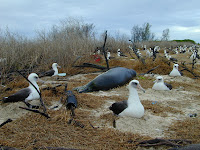 the most endangered marine mammal found wholly within US waters. Other critters that call Midway Atoll home are the Green sea turtle and the Spinner Dolphin. 3 other species of sea turtle and 9 additional whale species that can be sighted in the protected waters surrounding the atoll.

There are 17 other seabirds that are known to nest on Midway, 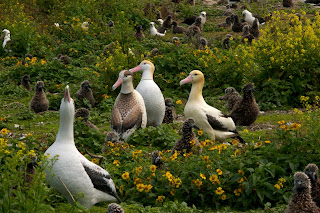 The "Golden Gooney" or Short-tailed Albatross can also been seen on the islands of Midway. Thanks to the establishment of a decoy plot about 8-years ago on Eastern Island (one of the 3 islands found at Midway) there is hope that the Short-tailed Albatross will again start breeding on these islands. In addition to the seabirds a duck, the critically endangered Laysan Teal was also recently reintroduced to Midway Atoll and has quite successfully re-established itself on Eastern and Sand Islands. 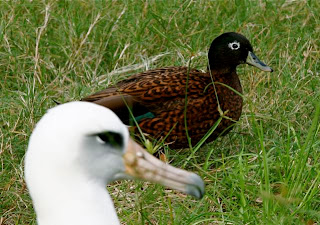 This year (2008) Oceanic has been able to bring out 7 different tourist groups to Midway Atoll, a little over 100 visitors in all have participated in our programs. In 2009 Oceanic Society anticipates offering 13 different program dates, I have been fortunate to lead all of our 2008 programs. Over the next few entries I will post information about what we were able to see and participate in while visiting the refuge this year. Here is a video that was taken just last week of a Laysan Albatross laying an egg to get you interested in exploring more!