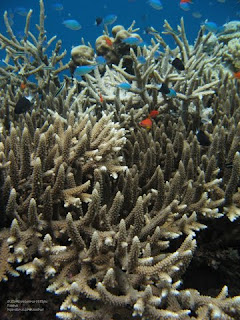 Here we are, in Fiji and I am finding myself thinking continually about marine debris. Don’t get me wrong, the waters here are vibrant with life, colorful corals, and swarms of multi-colored fish. Our snorkel group has spent that last four days on what is know as Rainbow Reef, in the Somosomo Strait, off of the island of Taveuni, and the reef has lived up to it’s name.
I am spending so much time thinking about marine debris because of some current projects that are happening in the Pacific Ocean. Currently the country of Kirabati, who recently gazetted the world’s largest Marine Protected Area, The Phoenix Islands Protected Area, has sent a team of researchers in to the reserve to continue documenting all that is there. The main team members are from the New England Aquarium, Kirabati, Woods Hole, Scripts Institute, and Kenya. None have been inside the reserve since 2005 and all are eager to see if illegal fishing and global climate change (in the form of coral bleaching) have taken their toll on the magnificence that originally inspired the protected status. 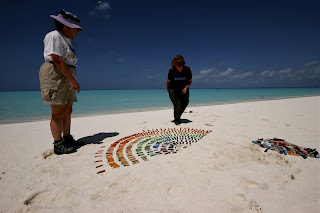 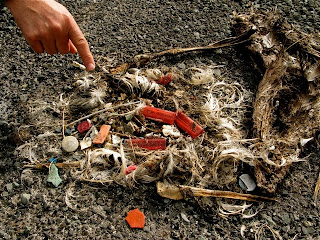 Also in our own backyard, at Midway Atoll in the Papahanaumokuakea Marine National Monument, the world’s second largest Marine Protected Area, a group of artists and filmmakers are exploring the Atoll and recording the consequence of marine pollution, specifically plastic marine debris, on the wildlife there. Plastic debris in the Pacific is increasingly being recognized as a likely cause of death for many of the Laysan and Blackfoot Albatross chicks annually. While currently (September) there are no albatross on Midway, there is however the decaying carcasses of this years unsuccessful fledglings, and almost all are loaded with plastic debris, picked up by there parents while feeding in the Pacific and regurgitated to their unsuspecting chick at Midway during the year. Each year it is estimated that over 5-tons of plastic finds its way to Midway Atoll’s islands by this route. Susan Scott, from Honolulu, an artist and marine science writer for the Honolulu Star-Bulletin has also been drawing attention to Midway's (and the Pacific's) plastic problem through her art recently shown in Hawaii. 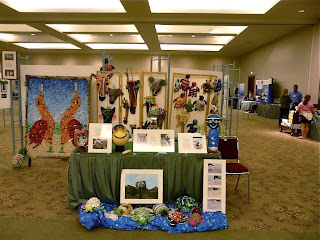 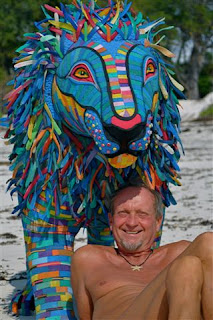 In Kenya my friend, and artist Andrew McNaughton is participating in a program sponsored by the Born Free Foundation called the Pride of Kenya.  Various artist were selected to decorate fiberglass Lions, that will be displayed throughout Kenya and draw attention to conservation challenges that carnivores face. Since Andrew is from Watamu on the coast of Kenya he decided to decorate “his lion” with marine debris collected off the beach in front of his home. He was hoping not only to create a fantastic Psychedelic lion, but take advantage of the programs visibility and draw awareness in Kenya to the problem their coastline is also experiencing with marine debris. For more photos of his marine debris art click here. 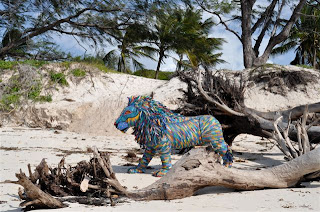 Finally another friend, and artist, Pam Longobardi is in Venice participating in an art show showcasing art related to the world of Water. Here are two photos of her work on display in Venice. 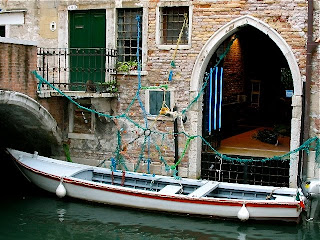 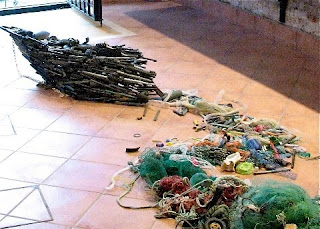 Clicking on Pam's name above will take you to her project website where you can view her art created from marine debris also collected in Hawaii. 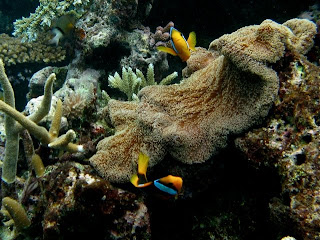 Here in Fiji we are inspired by what we are seeing. The reef teaming with life. However we too are witnessing man's impact on the marine world. Just yesterday while swimming we saw a plastic bag floating among the table corals. Fortunately one of our group, Pam Hileman, swam over and quickly retrieved the bag. This making sure that it did not end up in a sea turtle's throat, or wrapped around and eventually killing some of live coral that we had all come so far to see. It was just one more reminder that we are ultimately responsible for what is in our seas, whether we directly put it there or not. We can no longer just turn our heads and hope that it not as bad as we think. Please follow the above groups and support their efforts. For more information about seeing and participating in the conservation of marine areas see Oceanic Society, a marine conservation non-profit based in San Francisco. Offering research programs and ecotourist trips to marine areas around the globe. 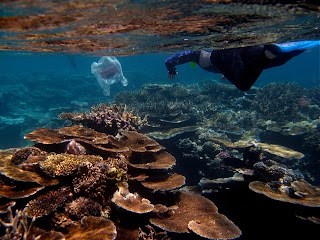 Posted by naturefinder at 4:38 PM No comments: Links to this post